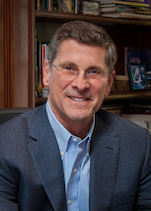 William E. Simon, Jr. is an Assistant Adjunct Professor, and the Co-Founder of the Benjamin Graham Value Investing Program in the UCLA Department of Economics. In addition, Mr. Simon is a Partner Emeritus at Simon Quick Advisors, a wealth management firm with $3.7 billion in assets. Previously, he was Co-Chairman of William E. Simon & Sons, LLC which he founded in 1988 with his brother and late father, the former U.S. Secretary of the Treasury.

In 2002, Mr. Simon was the Republican gubernatorial nominee in California. From 1985 to 1988, Mr. Simon served as Assistant United States Attorney in the Southern District of New York.

As an Assistant Adjunct Professor in both the Department of Economics and the Law School at UCLA, Mr. Simon has taught courses on value investing, financial crises, leadership and rhetoric. He is a recipient of the Graham & Dodd, Murray, Greenwald Prize for Value Investing, the 2018 UCLA Marty Sklar My Last Lecture Award, and several honorary degrees. Mr. Simon earned his bachelor’s degree at Williams College where he is Trustee Emeritus. He is a 1982 graduate of Boston College Law School.