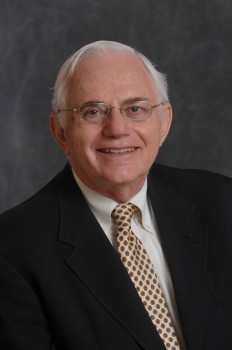 It is with deep sadness that we mourn the death of our colleague Michael Intriligator. Once aware of the seriousness of his illness, Mike faced his prospects with the same courage, determination and equanimity that characterized his very full and productive life.

When I arrived at UCLA in 1973, Mike, by then a ten year veteran, welcomed me and offered his support. Later that year the department announced with great fanfare the creation of three well-funded applied workshops. I went to see Mike and suggested that we were being left out in the cold. “Of course not!” he responded. “We will start our own workshop.” Initially it was unfunded. But after we had shown the department that our workshop was here to stay, Mike was able to convince the department chair that micro theory deserved some support as well. It was a huge benefit to a young assistant professor.

At lunch one day, Mike asked about my musical interests. I admitted I listened to the Beatles more than Beethoven. Mike smiled and suggested that my interests might develop over time. Not long after, he dropped off a bunch of cassette tapes filled with classical music. A new world began to open up for me.

Over Mike’s highly productive research career he wrote close to a hundred and fifty papers. About half of these were in the Interdisciplinary field of Strategy and Arms Control with the rest divided among Theory, Econometric Theory and Health Economics. He published in the American Economic Review, Journal of Political Economy, Quarterly Journal of Economics, Journal of Public Economics, and Public Choice (to name just a few!) His contributions were recognized both nationally and internationally. He was elected a Fellow of the Econometrics Society in 1982 and a Fellow of the American Association for the Advancement of Science in 2001. He was also a foreign member of the Russian Academy of Sciences.

Mike was also a highly effective teacher. Through his efforts in the classroom he was a four time winner of the Scoville Undergraduate Economics Teaching Award at UCLA. However his influence as a teacher of economics was far deeper and broader. In 1971 his text book “Mathematical Optimization and Economic Theory” was first published. Fifteen years later it was in its 13th printing. More than forty years later it is still one of the very best introductions to dynamic optimization. Until Mike wrote this book, the Calculus of Variations and its further development as Pontryagin’s Maximum Principle were used only by a few highly trained mathematical economists. After the book was published, a generation of economists with standard calculus skills were able to both appreciate and apply these techniques.

But Mike’s influence as a disseminator of ideas goes much, much further. With Kenneth Arrow he edited the highly influential “Handbook of Mathematical Economics”. This was followed by the Handbook of Econometrics (co-edited by Zvi Griliches). He was also co-editor of two other successful book series “Advanced Textbooks in Economics” and “Handbooks in Economics”.

Mike did this editing because he loved to make the connections between different sub-fields of economics and was always looking to distill the essence of new papers from the often highly mathematical presentations in the journals. It boggles the mind thinking how he could have done so much of this work, almost always offering ideas on how an article could be improved. Through these publications, there must be very few (if any) research economists of the late twentieth century whom he did not help.

Mike is survived by his wife Devrie (a research physicist at Carmel Research Center and a world renowned expert on space plasma physics) and four sons: Kenneth (professor of physics at UC San Diego), William (conductor of the Dubuque, Iowa, and Cheyenne, Montana, symphony orchestras), James (professor of psychology, Bangor University in Wales), and Robert (a Los Angeles-based composer). I remember having dinner with Devrie and Mike at their home and marveling at how Devrie could have achieved so much while bringing up four boys. “I did have some help!” she responded. She explained that Mike would drive her to her lab each day and wait in the car looking after the baby (and presumably writing in those moments while the baby slept.) When the cries for mom became too insistent, Mike would signal to Devrie to return to the car!

Mike died at peace, surrounded by his beloved Devrie and their boys and listening to his favorite classical music.