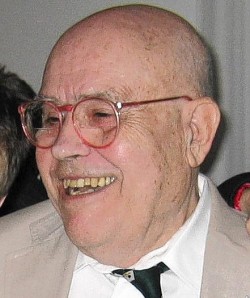 It is with deep sadness that we mourn the death of our colleague George W. Hilton who, at the age of 89, died of heart failure on August 4, 2014. George had requested that we print the obituary that he composed.

George Hilton was a professor of Economics at UCLA. He was a summa cum laude graduate at Dartmouth College. He had a PhD from the University of Chicago and wrote his dissertation at the London School of Economics. He specialized in transportation economics. He practically identified himself with competitive organization of the railroads and practically prided himself on his contribution to abolition of the interstate commerce commission. He wrote 15 books, notably a book on the Eastland disaster of Chicago, in 1915. A baseball fan he prided himself on introducing the shareholders resolution for the retirement of Warren Spahn’s Numeral 21. He was married twice. His first marriage was to the former Phyllis Bartlett in 1970 and divorced in 1974 and then married the former Constance Slater in 1983 she died in 2005. He had no children but he was a pretty good stepfather.