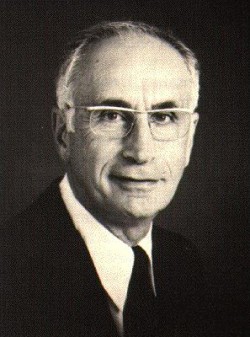 Economics of the firm.

Armen Alchian, a UCLA professor emeritus of economics who played an influential role in his field for more than half a century and helped elevate UCLA’s economics department to one of the most respected in the country, died on Feb. 19 at his home in Los Angeles. He was 98.

In a ceremony March 23 at the UCLA Faculty Club, a representative of California Assembly member Holly Mitchell (D-Culver City) presented his family with a flag to honor him for his dedicated service as a UCLA professor and World War II veteran.
Alchian was known for groundbreaking research on the employee-employer relationship, the hidden inefficiencies of governmental regulation and the forces that determine the success of firms.
“I’ve enjoyed working on problems in economics so much that it didn’t seem like work,” he said in 2009.
Born on April 12, 1914, in Fresno, Calif., he attended Fresno State College in 1932 and transferred to Stanford in 1934. He obtained his B.A. from Stanford in 1936 and continued his graduate studies there, finishing his Ph.D. dissertation in 1943 on “The Effects of Changes in the General Wage Structure.” In 1940-41, he worked at the National Bureau of Economic Research and Harvard, and, in 1942, became an instructor at the University of Oregon. He served in the U.S. Army Air Forces from 1942-46 doing statistical work.
In 1946, Alchian arrived at UCLA, where he became a full professor in 1958. He received numerous awards and honors over the years, and became a Distinguished Fellow of the American Economic Association in 1996. As the first member of the UCLA economics department to have a PC in his office, he was also an early user of email. Alchian, whose colleagues called him “the Armenian Adam Smith,” retired in 1984 but did not close his campus office until 2007.

Alchian also had an 18-year affiliation with the RAND Corp., and became known for work that looked at the hidden costs of regulation. In a 1962 study of heavily regulated industries, for instance, he found employers less likely to hire well-qualified minorities.

But he acknowledged in a piece that he wrote for Economic Inquiry that, at first, RAND “was not sure what an economist would do. I certainly didn’t know either. But I learned a lot about “big real world problems’–too big to comprehend, usually. Since it wasn’t clear at first what an economist could do that was pertinent, the task was to snoop around, look at the problems being analyzed (defense problems, usually) and try to see how economics could help. What we economists did first was detect how economics was being ignored, in particular how costs and interest rates were ignored in making military-strategy decisions.”

At UCLA, Alchian was known to his students, colleagues and others as the founder of the “UCLA tradition” in economics. This tradition, which continues to this day, emphasizes that individual behavior is self-seeking and “rational,” and that this has many unanticipated consequences. It recognizes that “rationality” is the outcome of evolution and learning, and emphasizes that frictions, such as uncertainty, act as brakes on an individual’s ability to make decisions and coordinate with one another.

Generations of undergraduates also received their introduction to the field from “University Economics,” an influential textbook co-authored by Alchian in 1964 that eventually appeared in six editions.
“His lectures were always provocative and sometimes terrifying,” recalled John Riley, the chair of the Department of Economics. “He simply walked into class and asked questions,” questions not necessarily connected to the previous class. “The students understood that the goal was to teach them how to think like an economist. But almost no one could think quite as quickly or clearly as Armen. Junior (and not so junior) faculty often faced the same challenges around the lunch table!”
Alchian was also much appreciated by generations of graduate students, largely through his first-year course in microeconomics. His best-known student was William F. Sharpe, who received the Nobel Memorial Prize in Economic Science in 1990 for his work on finance.
“Armen Alchian … was my role model at UCLA,” Sharpe once wrote. “He taught his students to question everything; to always begin an analysis with first principles; to concentrate on essential elements and abstract from secondary ones; and to play devil’s advocate with one’s own ideas. In his classes we were able to watch a first-rate mind work on a host of fascinating problems. I have attempted to emulate his approach to research ever since.”
Riley also recalled Alchian as a generous and caring person. “Soon after my arrival at UCLA in 1973, I went down to the faculty club on my own. Out on the patio the round table of economists was full. I hesitated and thought, perhaps I should sit at another table? … It was the most senior person at the table who spotted me, leapt to his feet, insisted that I take his chair and raced off to get another one. Of course, that was Armen Alchian.”
A resident of the Mar Vista area of Los Angeles, Alchian was married for 73 years to Pauline, a former elementary school teacher. They have two children, six grandchildren and three great-grandchildren.