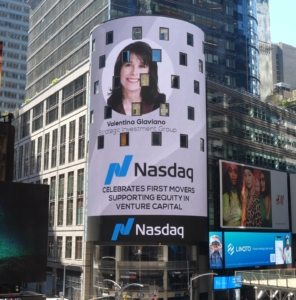 Valentina Glaviano grew up in Sacramento, California in a first-generation Italian American household. In high school, she was a stellar student and was admitted into plenty of colleges come senior year. The commitment process, however, was what she described as conservative. In addition to weighing academics, she had to choose a school that she could afford. As a California resident, UCLA became the obvious choice.

Coming into college, Valentina had tremendous clarity regarding what she wanted to pursue over the next four years. From a young age, she was set on working in the financial services industry because she viewed smart investing, along with education, as a massive equalizer that helps bring people out of poverty. Growing up, her parents were good investors, which allowed them to pay for her high school education at a private college prep school. In a similar manner, she too wanted to make a transformational difference in people’s lives by providing financial returns.

In order to pursue this goal, she chose to study economics. She was particularly attracted to UCLA’s economics program due to its focus on broad international themes. According to Valentina, at the time, “economic theory mainly focused on money supply” which is where UCLA was able to differentiate itself.

In order to maximize the value she could obtain from her degree, Valentina’s college experience was primarily focused on two things. First, of course, was schoolwork. She described the classes she took as being directly applicable to the work she would go on to do in asset management. The second thing she devoted attention to was her job, which she took up in order to pay for tuition and rent. To get the most out of her time, she opted to apply for a commissioned sales position instead of one with only an hourly wage. In this position, she picked up valuable skills, which would help her land a job in finance upon graduation. She treated each sale much like a challenge and learned that one must take a fearless approach. Valentina described this process as the “hunt” and stressed that in order to be successful, one must thoroughly enjoy hunting.

When it came time to look for a full-time job, her sales skills translated to conquering a fear of rejection and being relentless when networking with professionals in the financial services industry. Even though she was not a member of any business club like so many economics students are now, she was still able to build a network of connections on her own. This allowed her to get a job in investment management upon graduation, and she has been working in finance ever since. Such an industry is notorious for its long hours, especially for analysts fresh out of college. Her advice to avoid feeling overwhelmed is that one must first “work in finance for the right reasons”, meaning they must actually want to help people. Those who enter for the lucrative compensation “rarely succeed long term”.

Valentina’s own passion for helping others through finance continues to motivate her through her busy workdays. Valentina wakes up at around 5:30 am, starting her day off with an early morning workout. If she finds herself in the office that day, then she will generally be attending several back-to-back meetings in which she meets with team members on the various projects that she is leading. On the other hand, if she is traveling that day, she expects to primarily meet with prospective clients to demonstrate why her firm’s outsourced CIO approach aligns with the missions and values of the client. She emphasized the extensive research necessary to prepare for her meetings, including material that might sound familiar to business economics students. Valentina pulls balance sheets, income statements, and annual reports in order to analyze metrics like the variability of income, the stress of the balance sheet, and spending deficit. Ultimately, she ends the work day feeling fulfilled from rising up the challenge of her job and from the satisfaction that her work is helping improve the life of many others.