Bond Liquidity During the Covid-19 Crisis 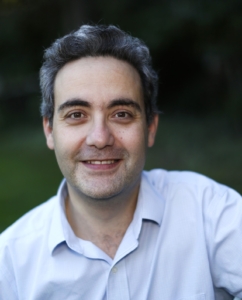 The COVID-19 pandemic has wrought havoc on the global economy. To cope with this unprecedented economic shock, many large US corporations turned to the $10 trillion corporate bond market. However, with the prospect of downgrades and possible defaults, along with widespread outflows from corporate bond funds, reports of illiquidity began to surface very early on: in mid-March, 2020, former Federal Reserve chairs Bernanke and Yellen described the corporate bond market as “under significant stress”, while a report from Bank of America deemed the market “basically broken”. In response, the Federal Reserve introduced several facilities designed to bolster liquidity and reduce the costs and risks of intermediating corporate debt, including the Primary Dealer Credit Facility (PDCF) and the Primary and Secondary Market Corporate Credit Facilities (PMCCF and SMCCF, respectively). The latter two facilities represented a particularly bold intervention, in that they allowed the Fed, for the first time, to make outright purchases of investment-grade corporate bonds issued by US companies, along with exchange-traded funds (ETFs) that invested in similar assets.

A key contribution of this study is to consider both the cost and the quality of intermediation services provided. More specifically, it distinguishes between two types of transactions offered by dealers. First, fast transactions called “risky-principal” trades, that occur when dealers trade immediately in and out of their bond inventory. Second, slow transaction called “agency” trades, that occur when dealers do not trade from their inventory, but instead try to locate a trading counterparty for their customers (acting very much like real estate agents).

Using data from the Trade Reporting Compliance Engine (TRACE) made available by the Financial Industry Regulatory Authority (FINRA) the study separately measures the costs of risky-principal and agency trades. As shown in the Figure, the cost of risky-principal trades increased significantly during the COVID-induced panic, reaching a peak of more than 200 basis points (bps), while the cost of agency trades increased much more modestly.  As the premium paid for risky-principal trades increased, the study documents that the fraction of total volume executed as agency trades increased by as much as 15% at the height of the sell-off. This implies that the average trade was not only more expensive, but also more likely to be of lower quality. This highlights the importance of studying both the cost and quality of intermediation services: simply measuring the behavior of average transaction costs during this period would underestimate the deterioration in market liquidity.

As trading shifted from risky principal to agency transactions, the study shows that, somewhat astonishingly, the dealer sector as a whole absorbed no inventory, on net, during the most tumultuous period of trading. Hence, when the demand for transaction services surged, it was customers themselves that ultimately stepped up to provide additional liquidity. In fact, it was only after the announcement of the Federal Reserve’s interventions that dealers began to absorb inventory onto their balance sheets, and trading conditions started to improve. Indeed, after the announcement of the Fed’s credit facilities until June 2020, the quantity of corporate debt held by dealers more than doubled, relative to pre-COVID levels. At the same time, the cost of risky-principal trades decreased significantly, to approximately double the levels observed before the pandemic.

To establish the causal effect of the intervention on market liquidity, the paper exploits restrictions on the types of bonds that could be purchased through the Fed’s corporate credit facilities: it shows that, immediately  after the announcement of the SMCCF, the cost of trading bonds that were eligible for purchase by the Fed decreased substantially, while the cost of trading ineligible bonds was essentially unchanged. Later, when the program was expanded in both size and scope, we show that the trading costs of all bonds fell. Hence the initial announcement induced dealers to purchase eligible bonds at a lower cost, while the expansion of the corporate credit facility appears to have relaxed balance sheet constraints more generally, making dealers less reluctant to purchase any bond. 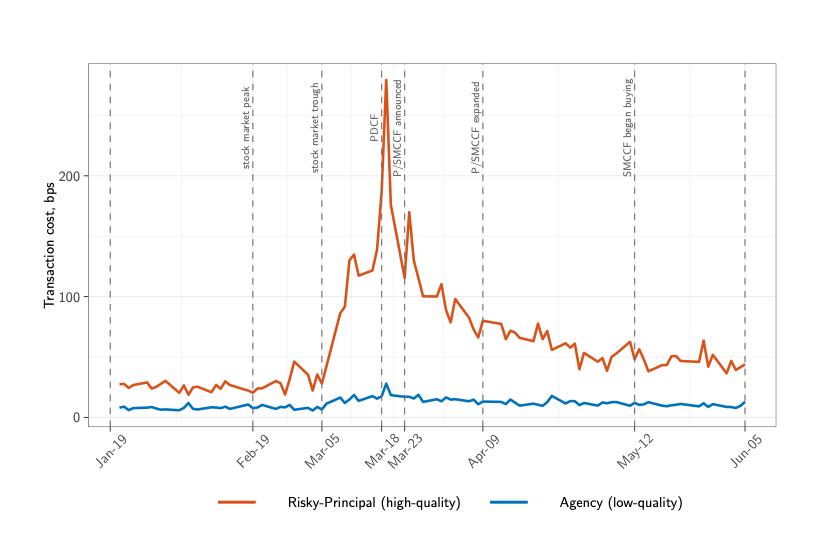