If you took a student from a painting class, and dropped him into a venture capital firm, you probably would expect him to struggle. After all, fine arts and economics seemingly have very few similarities, and their educational paths could not be any more different. But for Mark Kingdon, one of his strongest skills as an investor lies in his artistic background that he began nurturing from a young age.

Mark hails from Northern California and grew up in a household wholly supportive of his artistic endeavors. Before matriculating at UCLA, Mark studied fine arts at UC Santa Barbara under the creative and philosophical guidance of Bill Rohrbach. But his desire for autonomy and the quest to expand his horizons led him to the Parson’s School of Design in New York City, where he sought to apply his creativity to a field that would presumably return a stable income.

Mark’s exploration of design came to an end shortly after discovering it wasn’t the field for him. His search for a new professional direction led him to Westwood, where he began his studies at UCLA’s Department of Fine Arts. Mark loved the arts, and continues to do so today, but he encountered a fork in the road when assessing whether or not he could financially sustain himself in the field. He worried that pursuing a career in the arts would force him to sacrifice his artistic autonomy. This pivotal period of contemplation led to his enrollment in the economics department, where he could utilize his analytical skills in a field of study characterized by math and social sciences.

In addition to his studies at UCLA, Mark served as the classified line manager at the Daily Bruin, overseeing advertisements placed in the campus’ newspaper. Finding new avenues of funding allowed Mark to expand the breadth of his entrepreneurial abilities that would complement his love for analyzing patterns.

Mark graduated from UCLA in 1986 with a degree in economics, and immediately entered the M.B.A. program at Wharton. Following his second graduation, he went to work for Coopers & Lybrand (which later became PwC) as a strategy consultant focused on helping companies develop new digital channels (even before the advent of the commercial internet).  Mark moved up the ranks to partner and ultimate joined the global senior leadership team, leading pre-merger planning and post-merger integration when Coopers & Lybrand merged with Price Waterhouse in the largest merger in the history of professional services. But late in the 1990s, the internet beckoned and Mark joined Idealab!, one of the first internet incubators where he reviewed investment opportunities by working with ecommerce startups. Throughout, he was driven by his ambition of becoming the CEO of a publicly traded company before the age of 40, and worked hard to achieve this dream.

Mark shortly got his chance at Organic (NASDAQ: OGNC), a firm known for placing the first banner ad in internet history. The internet bubble had burst, the company was losing tens of millions of dollars and revenue was dropping, so, he took the publicly listed company private with private equity money and executed an aggressive and painful turnaround —  cutting the staff by 85% and eliminating over $100 million in real estate liabilities. In addition to his structural reforms, he refocused the company on digital innovation, becoming one of the first companies to place advertisements on MySpace and Facebook. During his tenure, he started investing his own money in promising Internet startups. When he felt he’d finished his work at Organic (industry leading company in terms of market perception and profitability) he left to become CEO of Second Life, the online virtual world.

Mark had been making investments since 2006, and in 2010, left Second Life and founded his own private investment firm now named Quixotic Ventures. The word “quixotic” roughly translates to “exceedingly idealistic; unrealistic and impractical”. It may seem naive to sport an “exceedingly idealistic and impractical” mindset in an industry with significant financial risk, but Mark found success through his own unique and innovative approach.

“People laughed at me when I invested in Twitter,” Mark said.

Twitter wasn’t the only objectionable investment he made. His optimism in RealReal, a luxury clothing resale company, also provoked disapproval. “People told me there was no market for used clothing. Well it turns out a lot of people will buy a used Chanel handbag,” Mark added.

Those people were wrong, and over the years, Mark has amassed an investment portfolio whose companies have a created a combined market value of more than 32 billion dollars. His analytical skills, artistic background, and “quixotic” approach to investments allowed him to forge his own financial independence and an ability to sponsor the arts. He is currently a Board Trustee for the New World Symphony, an orchestral academy that prepares music graduates for leadership roles in professional orchestras and ensembles. Mark also currently collects art, but primarily expresses his artistic abilities through gardening, and has a budding collection of rare palms.

His artistic upbringing proves to be one of his most essential skills in identifying investment opportunities. The visual analytics he refined in his fine arts studies enables him to be visually critical when viewing consumer apps seeking his investment. It allows him to properly gauge which interfaces will gain the most traction with consumers. The distantly related field of art gave Mark the skills that separated him from other investors in financial industries.

Mark still fondly reflects on his time at UCLA, and has very valuable advice for current Bruins: “You’re going to be working for the rest of your life and you have to be doing something that you love. You don’t want to do something boring. If your passions change, then you shouldn’t be afraid to find a new direction.”

Mark never feared the uncertainty of a new career path, and implores all current Bruins to pursue their ambitions with the same mentality.

“I’ve made three major career changes in my life… leaving something very certain behind for something very uncertain in the future. Every time I did that, it paid off enormously.” 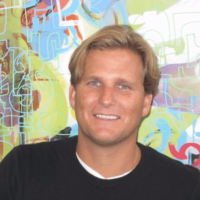